Still not sure what to do with this website, but if anyone is still reading… I’m a lot more active over on Hawaii Girl Travels. Happy New Years!

Me: I came up with travel goals for the next decade. I want to visit Japan, Norway, New Orleans, the Netherlands and stay at an overeager bungalow. That’s all.

R: that’s all? It seems a little ambitious…

E: last decade we had 2 kids… this isn’t as ambitious as that.

R: yeah… that was maybe too ambitious of us.

This Saturday Emma went to school… for cheerleading practice. Turns out the intermediate, JV and varsity cheerleading teams teach K-6 kids every year a couple cheers and songs and they all cheer together at the homecoming game later this year. I cannot wait! 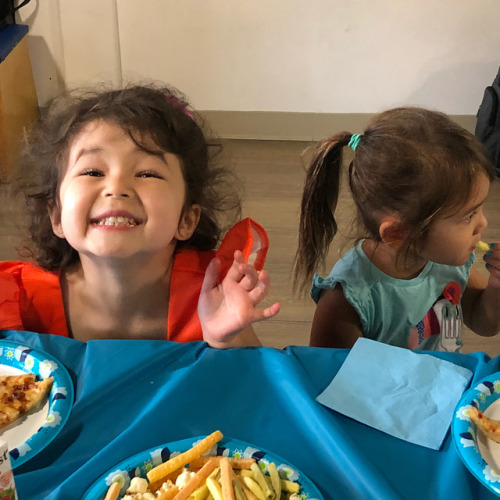 First birthday party with friends. I barely did anything and I’m still wiped! Happiest (belated) 4th birthday to my little Moana. (at My Gym Honolulu)

Emma: can we practice rhyming?

Me: ummm what did you say?

Me: do you know what kill means?

Emma: yes it means (smack hand on leg as if to kill a bug)… splat! 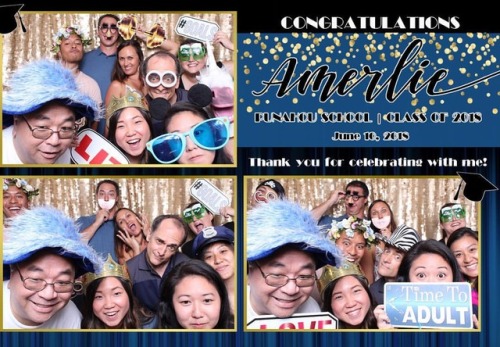 Absolutely adore my work fam… and getting to celebrate their achievements (or their family’s achievements). 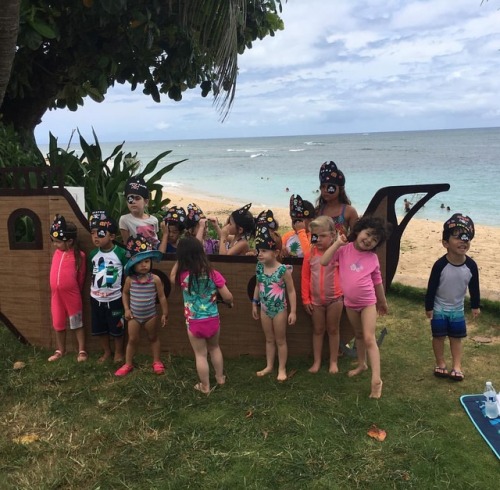 Celebrating BFF’s birthday… pirate style. Emma is so clearly my child – striking a pose for the camera. 🤦‍♀️ (at Haleiwa, Hawaii) 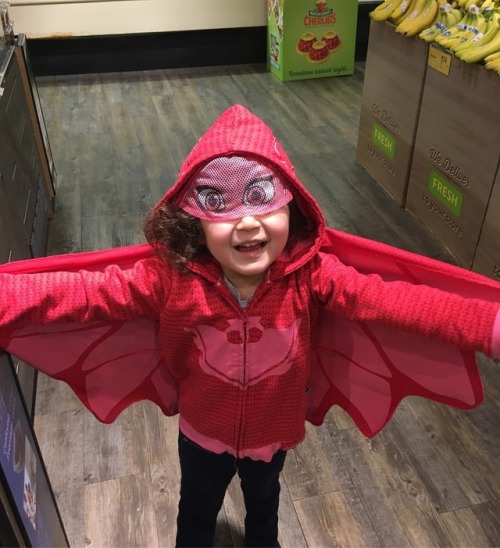 I can’t believe we are already down one month in 2018. Where did that month go? Thank goodness for iPhone pics so that I can remember. I have to say, 2018 started out really badly for me… because I make bad choices. Choices like excitedly using my new gift from “santa” to bring fireball whiskey to my family New Year’s Eve party.

Choices like following up the whiskey by partying it up with my cousin’s hubby who whipped out Crown Vanilla so we could reminisce about how we first started bonding years ago on NYE with fireworks and alcohol that no one else in the family wanted to drink. And so then when all the welcoming of the new year festivities came to an end, we started to head for home and I unceremoniously puked all over myself in my car, sitting in the back seat with Emma, resulting in my brilliant idea (I mean sober I still think it was pretty brilliant) of jumping in the shower fully dressed to try to wash off. And then passing out on the couch because Ryan wanted nothing more to do with me at that point. Have a mentioned I make bad choices?

Please note that these are photoshopped photos because sparklers are now illegal in the state of Hawaii and therefore there is no way that these are really pictures from new years. Also illegal was the beautiful array of aerial fireworks I got to watch from my cousin’s driveway… I swear the fireworks got more plentiful after the ban.

But January 1st indulgence issues aside, the year started to look up. I came into a huge windfall of money the first day back in my office. I won the weight-loss competition (more on how in a later post), fantasy football league and random $1 / month for a year raffle. What what!

The fantasy football money actually was Ryan’s winnings but after I explained to him that he should view me as his pimp, connecting him to the people that would end up giving him their money, I did get a small kickback. But the win also came with an awesome trophy to display in my office for the entire year as well. Holla!

My college roommate came to visit, which prompted the Hawaii contingency of Boston college to get together to celebrate.

Along with the next generation of BCers as well.

My cousin is pregnant with twins… yay!!! But seriously, as the second youngest in the family (for that generation) with a 6 year age gap in each direction to the next family member, the fact that my cousins (many of whom had kids before I even started dating Ryan) kept popping them out now that Emma is here makes me so happy. This particular cousin lives in California, so in a move where my older cousins showed me how much more tech savvy they are than me, they planned a skype baby shower so we could celebrate with her.

I was horrible at all the games that were played but did end up winning one game thanks to Emma deciding to join my team and correctly shout out the answers to children songs and nursery rhymes. What! What!

And then after all that excitement, my family left me for Disneyland (yes you read that correctly, my happiest place on earth and I was the one left behind!!!). And I was only slightly offended that Ryan was legit over the moon happy to be going to Disneyland without me (something about me never letting him eat lunch and death marches around the parks… whatever – I maximize fun time per minute). At least I got to enjoy Emma’s excitement prepping for Disneyland.

Truth be told, I was happy they were leaving as well. Not that I wanted to be apart from my family and not that I wanted to miss out on Disneyland, but the reason I wasn’t going was because January and February are my busiest times at work (and a time where I am in a blackout period from taking vacations).

I wouldn’t change my life for anything. I love my family so much and (while I bitch constantly about it) I really love my job as well. I need both sides to keep me sane – which leads to that third never ending job… juggling that work / life balance. I’m certainly not perfect, but compared to how I used to be I’m now a pro. But it is exhausting. I learned how important it is to spend quality time with family. But the work still needs to get done. So when the family goes to bed, I’m up in my home office burning the midnight oil and trading in sleep for work in order to “have it all”. I’ll admit I was pretty excited to get 5 days of just focusing on work and then getting to sleep at night. It worked perfectly on Thursday and Friday. And then Saturday the text heard round the world hit my phone.

I wrote a really long post about that day and I plan on sharing it sometime, but I’m not ready yet. I was really affected by the “missile crisis” as we’ve dubbed it out here. For those that have been living under a rock: a state worker was running a typical test of our nuclear missile warning system and somehow thought that the drill message was real (it’s come out that he’s had this problem before) and used the Hawaii Emergency Management system (available for Amber alerts, hurricanes, etc.) to send the above message to cell phones across Hawaii as well as similar warnings to radio and television stations. To summarize, I thought I was going to die for 38 minutes and then it came out that it was a false alarm. My day turned to crap and I didn’t really recover from it for awhile. Watching people put their kids in storm drains to save them and listening to the typically most chill men in my office tell me that they got in the bathtub with their entire family and prepared to use their own body as a shield against debris if necessary made me so thankful that Ryan and Emma were gone, but I think I took longer to get over it because they were out of town.

Anyway, I don’t want to end on such a downer note so I will say that I finished out my MLK Jr. Day weekend without the family by rocking the crap out of Emma’s latest homework assignment (make a culture doll of your child). 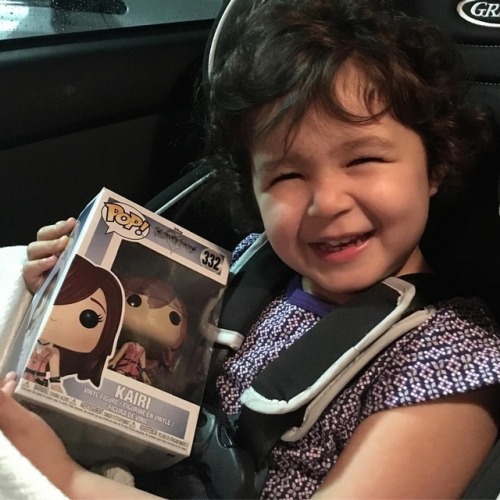