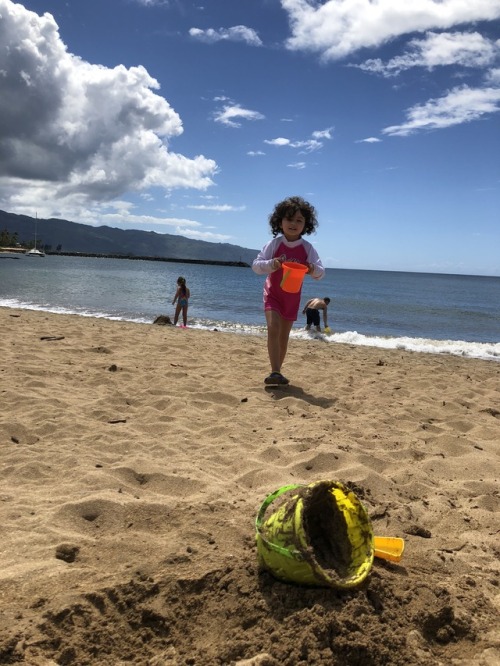 On how I’m a horrible, lazy and inattentive parent.

Emma is afraid of EVERYTHING. I’d like to say I don’t know where she gets it from but I think I was way worse when I was her age. Taking off Friday in order to get a four-day weekend (since Monday is Labor Day), Emma and I found ourselves at Haleiwa Beach in order to get in some sun before “checking-in” to our north shore Airbnb. Our beach time started out the same as other days at the beach, with Emma obsessed with getting ocean water into her buckets but too fearful to do it by herself causing me to make endless trips between the shoreline and our blankets and sun tent. After awhile of playing water getter I was parched and told Emma we had to return to our sun tent for a water break. Shortly after that however Emma decided she could fill up the buckets all by herself. I weighed the dangers in my mind of letting her go off without me versus letting her try this to build her confidence and bravery and came up with the following: 1) there was no undertow, 2) even though there were waves at the most they would only come up to her knees where she was standing and lastly, 3) I could reach her to help her in about 1 second if she did get in trouble.

So I feigned disinterest in her new plans and secretly watched her like a hawk as she happily headed off to the water, bucket in tow. Everything was fine at first but then a big wave came and knocked her over. My brain had to work in overdrive telling my body not to jump up and race to her side but instead wait and she what she would do. Would she start to get upset or would she stand back up completely fine, knowing that the water was barely covering her butt.

I didn’t get to find out. A father playing with his own kid nearby raced over and picked her up. Truth be told I was super irritated that he ruined my “test” but chagrined enough to call out a thank you as he passed by a couple minutes later as he was leaving the beach. And that’s when he decided to tell me off for being the most irresponsible, lazy and inattentive parent. In a very rare show of calmness I just gave a quick nod and turned away from him. But since he had made me feel like a failure I decided to check with Emma on how she was feeling when she came back up to the tent.

So thank you Mr. Over Concerned Beach Going Dad. I guess despite my horrible parenting skills I’m still raising a pretty fantastic kid.